I decided to take a late Saturday afternoon ride on the Minuteman Bike Trail. This trail technically runs from the Alewife T Stop in Cambridge out to Bedford, but an extension to the trail brings it through part of Somerville, to within about a mile of my house.

I had ridden it once before just to Arlington Center, a mile or two past Alewife station, so today I thought I'd head out and try to go a bit further than I had last time. I had the idea that I might gradually build up distance on separate rides until one day making the entire journey to the end and back. Before today, I didn't even know where the end actually was, so it was sort of a magical mystery dream to explore as far as the end of it.

The ride was really pleasant, despite the throngs of idiots who pollute the trail on a nice summer day. Stupid moronic families loitering in the middle of the trail huffing and puffing, drinking juice out of a thermos. Get off the trail! Imbecile children riding on the wrong side of the path while imbecile parents warn them about completely stupid things like "don't go too fast, stay close to daddy," when they should be warning them that they're going to become kid-smear the first time some fast bicycle comes around a blind corner. Idiotic inline skaters who do their stupid skating moves in the middle of the trail, headphones blaring, obliviously sliding as far to the left and right as they possibly can as they meander their way up the path. Hey idiot! Olivia Newton-John just called and they're worried about you back in Xanadu!

Anywhoo... as I was saying, the ride was pleasant nonetheless. It's just a good thing I'm such a patient, easy-going, happy-go-lucky kind of guy.

After I had made it to my previous mark at Arlington Center, I was still attached to my original plan. Just go until the next "town intersection" or whatever and turn around. Well I started scooting along and before I knew it I was completely confused as to where I'd gotten to. Most of the path is bordered by either random suburban backyards or by public parks, making for a confusingly non-descript repeating landscape of baseball diamonds and monkey bars (which must be part of the attraction for the drooling stroller-pusher crowd; this trail is like the world's best bar-hopping strip for the Gymboree crowd). I kept thinking I would just go a little farther until I could figure out where I was. I was slightly concerned about getting too far and then having to trudge all the way home, but I took comfort in the fact that the trail seemed to be almost entirely a slight uphill incline going this way, so going home, I'd be practically coasting.

As I said, the trail is basically a connecting route for mothers drunk on the idea of bringing their children to the next park. But one field really stood out as I rode past. This was no municipal little league field. This field was not even fit for a state college! Surely it must be some kind of private hoity-toity school with bazillions of dollars: 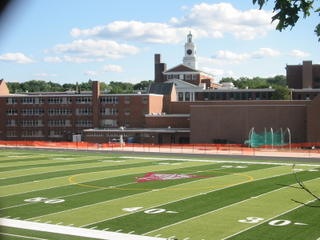 But in fact, on the internet later, I discovered it is part of Arlington High School! A public school? I presume so. It sure looks nicer now than it does in that overhead shot on the web.

After not too terribly long, I made it to an intersection where the Veterans of Foreign Wars office confirmed for me my location in the city (town?) of Lexington, MA. Well, this is where I figured the bike trail ended. I hadn't looked on the web carefully enough, I suppose, but it had been my anecdotal impression that "the bike trail goes all the way to Lexington." So surely it must end soon, if not now. I kept pedaling.

I was in fact starting to get a little bit tired. I hadn't eaten lunch, and hadn't had much water to speak of for that matter, either. I arrived at Lexington Center (I presume) where I was greeted by a lovely drinking fountain and a quaint little tribute to the man who allegedly spearheaded the bike path I was presently enjoying. 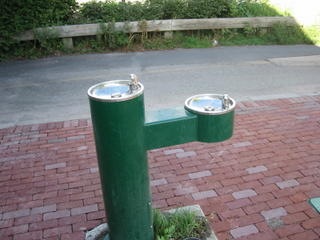 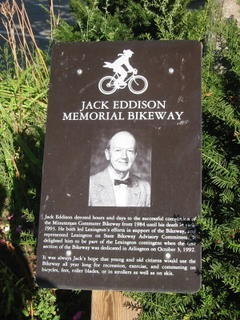 I was pretty sure the path ended in Lexington, so I forged onward. I was still feeling surprisingly energetic, and I was excited to think that I might actually make it to the end today! The path at this point is very rustic, with few houses abutting it. I think in Lexington and beyond a lot of the land around it might be park land. I stopped to take a picture of what was ahead of and behind me on a particular straight stretch of path. 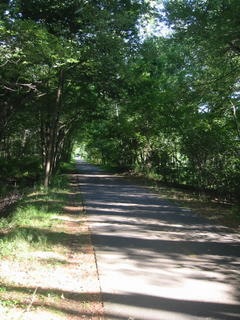 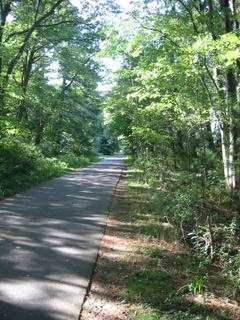 Finally, I reached an "end of the road" looking place. Bedford, MA! Hmm! Well, I didn't know it went there, and that's kind of far! I asked some bike dorks in the parking lot if this was the end of the road, and they confirmed it. Here is a dorky little restaurant or something you can go to if you end up at the end of the Minuteman Bike trail.

I was so disappointed with the destination (no offense to Bedford residents, I'm sure it's got much prettier spots than this - and isn't BBEdit made there?), that I decided to venture a little off the trail, just to see what was around. I went about 500 feet in one direction and discovered the welcome sign to Raytheon, a major military defense contractor. Gotta love the calm, relaxing countryside! 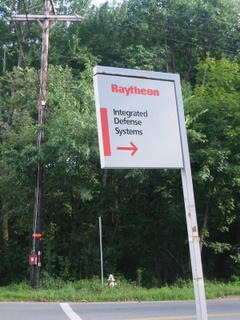 I decided to head home. I had passed up some interesting sites on the way in without taking pictures, because the uphill incline encouraged me to keep my momentum instead of stopping for tomfoolery. On the way back, I made sure to stop and grab a shot of an amazing sign I had seen on the way in. There are few signs on the path, so you notice them when you see them. I couldn't help but wonder when I saw this sign, is somebody going to sell me crab here, or are they inviting me to play Nintendo's Legend of Zelda? 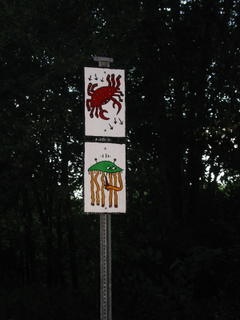 It turns out that this sign is a remnant of what was once a more prolific guerrilla art exhibit on the trail. I found a reference from the Minuteman Bike Trail site to the Sonik and the "Bolted Signs Project." While I'm excited to learn what the hell the signs were about, I'm glad the trail isn't littered with a bunch of signs like what's shown on the web site. Evidently somebody agreed with me and tore down all the signs except for the cute crab and squid pictured above.

The ride back was shaping up to be a bit tougher than I had expected. Apparently the "uphill incline" I had counted on for most of the trip had actually turned into a slight downhill after Lexington, and now I was paying for it. My fingers were turning numb from gripping the handlebars, and my ass was starting to hurt, due to the fact that all bicycle seats make your ass hurt unless you've been riding every day for a month. I was starting to think about the recent Runners World article I'd read about hill runners, and their tradition of grabbing a pint of beer between runs. I thought it would be a nice refuel, especially since I hadn't had lunch. Hell, I might be able to score a cheese toasty, or at least nachos. I stopped in Lexington, because they were kind enough to put a sign on the trail advertising the "Buckman Tavern." Hell yes! 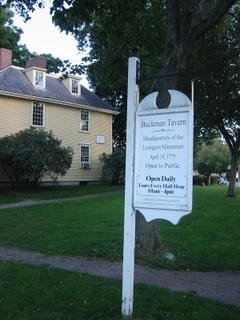 History Schmistory! It's just not cool to put a sign for a tavern on a bike trail where sweaty, exhausted individuals will read it, and have it be a historical museum. Eat your heart out, Jeff!

I thought maybe Lexington would have *something* to sate my hunger, so I took a walk down the street. Unfortunately, the town that once housed our country's most rebellious fighters is now home to posh yuppie eateries, Starbucks, and the most frickin' yupped out gilded Dunkin' Donuts on the face of the earth. 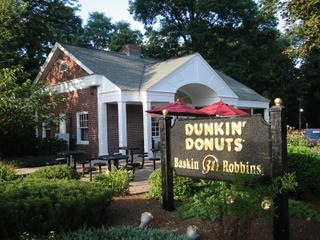 I decided to suffer the thirst and hunger and barrel on towards Arlington. On the trail, I did observe one slightly less highbrow refreshment offer. One of the applications of capitalism directly on the trail. I decided to keep pedaling instead of wasting time tinkering with these machines. 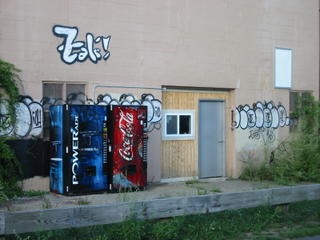 But I did stop to take a quick snapshot of the headquarters of the ice cream company I ridiculed in a recent post! 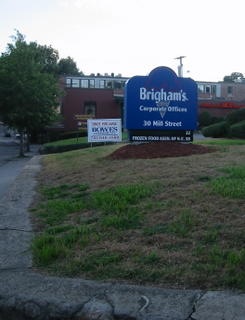 Finally I made it to Arlington, and stopped at Spy Pond, where a refreshing drinking fountain and the low sun over the water provided a kind resting spot. 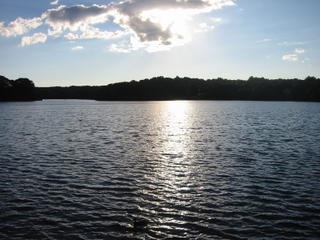 I made it home about 3.5 hours after I had left. Not bad for a 26-30 mile trek that included many a ponderous moment and camera clicking.